Home » Bar/Bat Mitzvah Facts vs Myths: Find Out Once & For All… 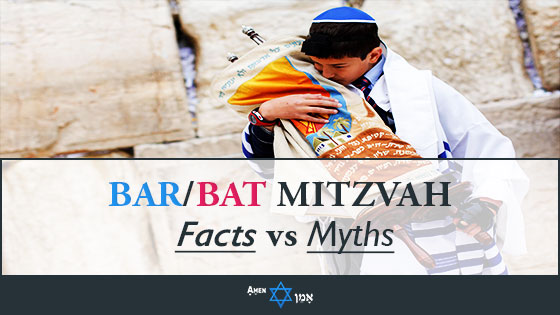 There are TONS of misconceptions out there about the Jewish Bar/Bat Mitzvah ceremony.

Question is – how do you separate the Bar/Bar Mitzvah facts from absolute myths?

Answer: You read this article 🙂

Grab a pin, we’re about to bust a few myths…

For someone attending a Bar Mitzvah ceremony for the first time, many of the Bar/Bat Mitzvah customs & rituals may seem odd:

Why do you perform these rituals? Are you even required to follow them? What should you do?

And what’s the whole purpose of this ceremony to begin with?

Myth: Bar Mitzvah is the name of the event

The term Bar (or Bat) Mitzvah is actually made of 2 Hebrew words:

“Son of commandment”? Doesn’t make a lot of sense, does it?

Not unless you dig deeper… That’s where the whole “Torah has seventy layers of depth” (Shiv’m Panim LaTorah) thing kicks in, so let’s break that down further.

In other words – the term “Bar Mitzvah” simply means a Jewish boy who is now subject to the Torah’s commandments (Mitzvot), even though nowadays people mostly use the term to describe the event itself.

The same logic applies to “Bat Mitzvah”, just for girls.

Fact: The Jewish coming of age is 13 for boys and 12 for girls

Note: With the exception of reform Jews, who also celebrate their Bat Mitzvah at age 13.

Myth: A Bar Mitzvah MUST read a Torah portion

This is one of the biggest misconceptions in Jewish tradition that causes most people to raise their eyebrows when they find out for the first time.

Technically speaking – there’s no strict requirement to have a Bar Mitzvah ceremony at all.

Like I mentioned earlier – the term “Bar Mitzvah” translates to “subject to commandments”, which means that when a Jewish boy reaches his coming of age, he’s now required to follow the Torah’s commandments.

The Aliyah is just a symbolic way to celebrate a Bar Mitzvah’s coming of age, but it’s NOT technically required by Jewish law.

Fact: The Bar Mitzvah takes Torah lessons with a Rabbi to practice his Torah reading

The Bar Mitzvah studies with a Rabbi for a few months to prepare for his Torah reading.

Note: These days, more and more boys and their parents decide to study with a Rabbi online.

This is a tricky one.

Let’s start with the Kippah (or yarmulke).

Jewish men have to wear a Kippah when they pray, or when they’re inside a place of worship (synagogues).

Every Jewish man above the age of 13 is required to put on Tefillin for the 6 other days of the week, EXCEPT Shabbat. That includes our birthday boy.

Although not required, many Jewish kids start wearing Tefillin a month or two before their Bar Mitzvah ceremony to get used to it. After all – if the Jewish boy is planning to wear Tefillin for his entire adult life – it would be a good idea to start practicing in advance.

If the ceremony is held on a Monday or a Tuesday (the other days we read from the Torah) – then Tefillin is allowed and they’ll wear it on during their Aliyah.

As for the Tallit – it varies by community. In Sephardic communities, boys wear a Tallit starting from their Bar Mitzvah (at the age of 13), while in Ashkenazi communities – men wear a Tallit only after they get married.

In conservative and reform communities, Bat Mitzvah girls wear a Tallit too.

Note: Obviously, some Jews decide to wear a Kippah at all times. But that’s technically not required.

Worth Mentioning: Actually, there’s a whole debate about whether it is required (Mitzvah) or simply a custom (Minhag). But let’s keep it simple…

Fact: A Bar/Bat Mitzvah HAS TO celebrate their coming of age

Well, this is odd… The Torah reading isn’t mandatory, but the celebration is?!

That’s precisely the difference between custom (Minhag) and law (Halacha).

But here’s the thing: A celebration doesn’t mean spending a fortune on the best Bar/Bat Mitzvah party in town with Drake as your guest singer.

Traditionally, it meant inviting your friends, family, and community to a small meal after the ceremony.

These days, it looks much more like the former.

Myth: Every Bar/Bat Mitzvah HAS TO celebrate their Bar Mitzvah in Israel (the Jewish holy land)

Do they HAVE to? No.

But many of them do celebrate their Bar/Bat Mitzvah in Israel (or at least try to convince their parents).

They visit the Western Wall, take a trip to Masada, and if they’re lucky – they might even catch a tan in Eilat, float the Dead Sea or go walk on water on the Sea of Galilee (OK, they probably don’t walk on water, but you know what I mean).

Myth: Adults who haven’t celebrated their Bar/Bat Mitzvah at their coming of age, have missed the train, and can’t celebrate it anymore

The celebration is exactly that – a celebration… it’s not an obligation.

Myth: The Bar/Bar Mitzvah’s coming of age means they’re ready to get married

Back to school, kids!

Fact: It’s customary for the Bar/Bat Mitzvah to give a speech

Usually, both the Bar/Bat Mitzvah and the parents give a speech (sometimes the drunk uncle too).

You know, the traditional shtick:

Yes, some boys & girls are incredibly shy and will try anything in their power NOT to give a speech.

Sure, public speaking is the #1 fear in the world (even more than death).

But hey – they reached their coming of age. So c’mon kids, time to grow up and face your fears (thankfully, I wrote a guide that makes writing a Bar/Bat Mitzvah speech a walk in the park, so no worries!).

Fact: During their speech – the Bar/Bat Mitzvah announces a special Mitzvah they’re focusing on

Note: This invites peer pressure and accountability to fulfill the Mitzvah

While men & women share many of the same commandments, women are exempt from some of the male’s commandments.

They also carry 3 extra commandments that are exclusive to women:

Fact: A common Bar Mitzvah custom is to throw candy at the Bar/Mitzvah during the Bar Mitzvah service

Yes, you heard that right.

The meaning of this (weird” tradition is to wish the young Bar Mitzvah a sweet life.

After the candy shower ends, you call the cleaning lady little kids to pick up the mess.

That keeps the kids busy for the rest of the ceremony. You know, kids aren’t famous for their ability to sit on their “tuches” for a few hours straight.

Just don’t forget to say the “Shehakol” blessing before you munch on the candy.

Personal Anecdote: Imagine being bombarded with candy on your head, especially when the women sitting upstairs have a wide-open angle. I should know, I got “hit” with a candy in my eye on my Bar Mitzvah… you call that a sweet life?!

Could you imagine if that were the case?! (Oh, the horror!)

A Bar Mitzvah has nothing to do with Brit Milah…

How should you behave at the ceremony?

What should you wear?

What should you say?

What exactly happens in those Bar/Bat Mitzvah parties, anyway?

Lots of questions… how about some answers?

Fact: The most appropriate Bar Mitzvah blessing in Hebrew is “Mazel Tov”

“Mazel Tov” is the Jewish version for “congratulations”.

Fact: You should dress modestly to the Bar/Bat Mitzvah ceremony

This is a formal event, often in a religious place… Tznius people!

The Bar/Bat Mitzvah attire depends on the type of venue:

It all depends on the type of event: For example, if you’re attending an Orthodox Bar/Bat Mitzvah ceremony – wear longer and more modest dresses (no cleavage!).

Myth: You Should send/receive the Bar/Bat Mitzvah invitations via WhatsApp

What’s personal about mass sending an invitation that took you two seconds to set up and hit “send”?

Myth: You can’t wear black to a Bar/Bat Mitzvah

I get where that question is coming from: “A Bar/Bat Mitzvah is a happy event, and black is associated with grief. Isn’t that inappropriate?

The short answer is no. Not only is appropriate, it’s actually a very good idea.

Your Bar/Bat Mitzvah attire should be formal, modest and respectful.

Black is a modest and respectful color in Judaism. It represents maturity, which is why many Bar Mitzvah boys wear their first dark (read: black) suit on their big day.

Note: Besides, if you wear black – your clothes won’t scream “Look at me! Look at me!”. If you attract attention – the Bar Mitzvah won’t like it (no cake for you!).

Look at Orthodox Jews… care to guess what they wear on a Bar/Bat Mitzvah?

Fact: The Bar Mitzvah service lasts for at least 2 hours

The Bar Mitzvah service usually takes place on the Shabbat morning service at the synagogue, which lasts for a couple of hours:

Finally – you have the Seudat Mitzvah (food!)

In other words – you’ll have to sit for a few hours without your mobile phone… Scary thought, isn’t it?

And let me tell you… it’s scary up there when your drunk friends throw you in the air like a pancake.

If there’s a chair dance, then why not a table dance?

Luckily, I just made this (myth) up 🙂 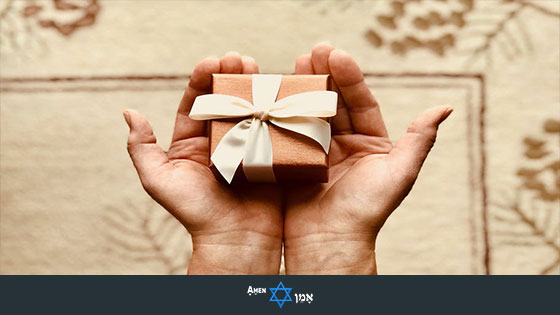 What gift should you get the Bar/Bat Mitzvah? Should you even bring a gift?

Should you bring money? If so, how much?

Myth: The most appropriate Bar Mitzvah gift is money

This is a highly debatable topic…

The truth is – it varies considerably between different countries and cultures. Here’s the common gift etiquette in various countries:

Note: In Israel – it’s almost considered rude NOT to give money. Keep that in mind if you ever attend a Bar/Bat Mitzvah in Israel.

Fact: It’s a common Jewish tradition to give money in multiples of $18

The number 18 in Judaism means “Chai” (חי) or “life”. When you give the Bar/Bat Mitzvah money in multiples of $18, you’re wishing them a long and successful life.

Fact: You should give your guests party souvenirs

This is especially true if you’re having a big Bar/Bat Mitzvah party in an event hall.

Fact or myth? You just found out a bunch of interesting Bar Mitzvah facts you didn’t know about.

Tell me in the comments!

P.S – Send this article to your friends who are about to attend a Bar/Bat Mitzvah ceremony. I bet they could use it. 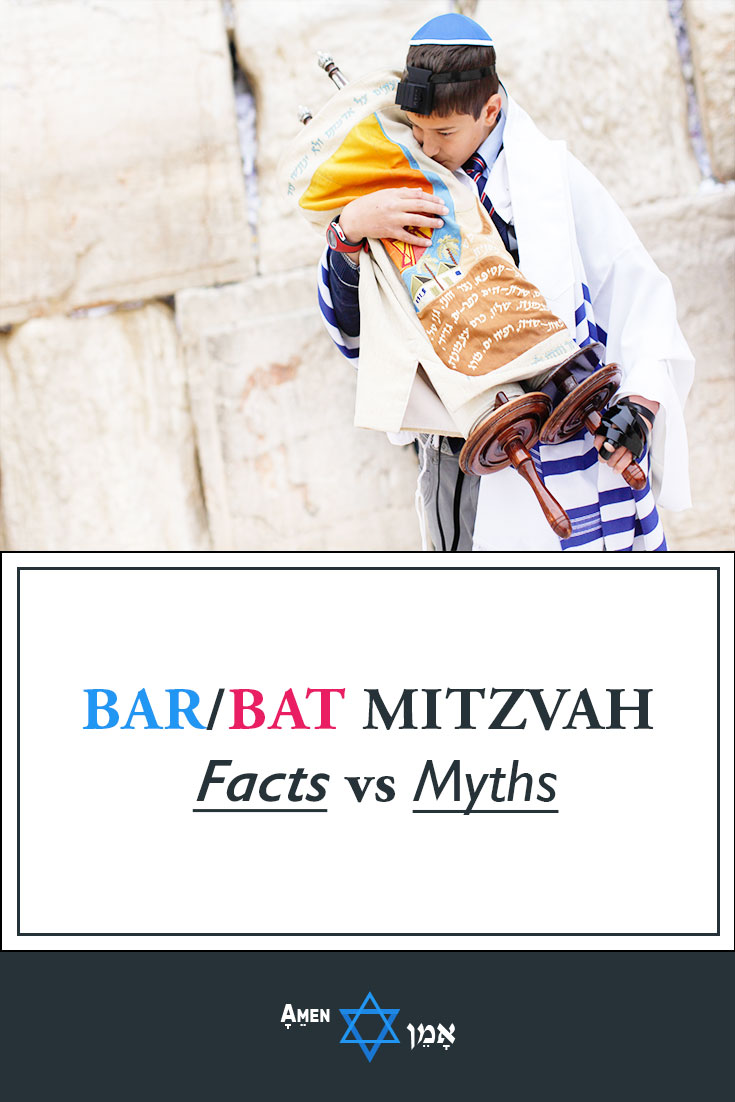 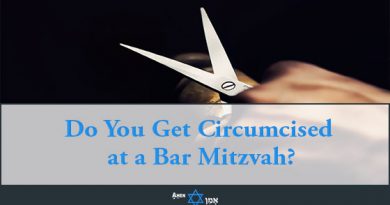 Do You Get Circumcised at a Bar Mitzvah? 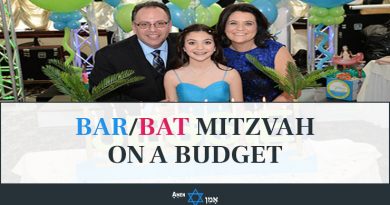