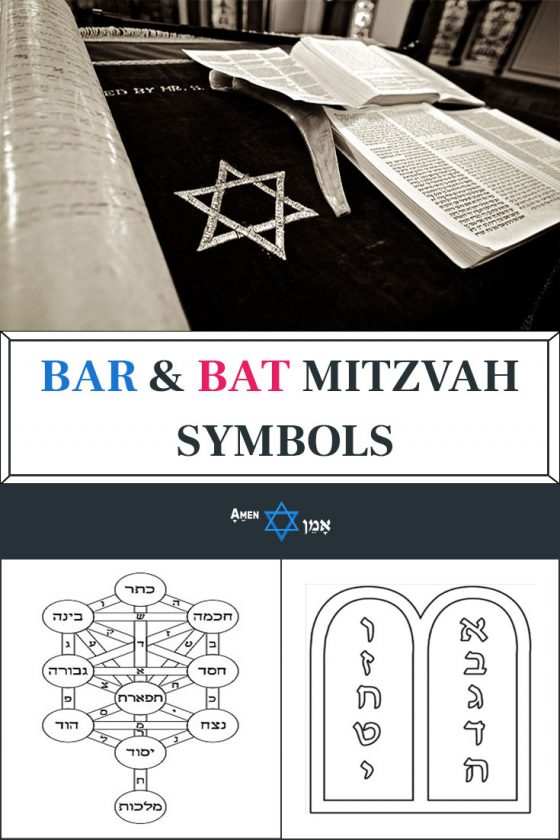 When you attend a Bar/Bat Mitzvah ceremony – you often wonder: “What the hell do all of these random symbols mean anyway?”

In fact, there are 4 levels of interpretation (also known as PaRDeS) in Jewish scripture used to discover the true meaning behind Jewish signs and symbols:

In other words – Jewish symbols sometimes have simplistic interpretations, and sometimes they have such deep, philosophical meaning that before you know it – you find yourself in a deeper rabbit hole deeper than the one Alice went through.

And guess what? The rabbit hole starts right here.

In a few moments – you’ll discover:

Kippah (or Yarmulke) is the famous headcover Jewish men wear every time they pray, read from the Torah (or other Jewish texts), attend Jewish ceremonies (like Bar Mitzvahs and Jewish weddings), enter a synagogue, attend a funeral or perform any other religious activity.

Contrary to popular belief, there’s no Halachic requirement to wear a Kippah at all times.

However, many Jewish men wear a Kippah as a sign of their piety and their belief in Jewish law.

Another reason Jewish men wear a Kippah is for accountability.

The Kippah serves as a constant reminder of God’s presence. Or, to quote Rabbi Hunah ben Joshua:

“The Divine Presence is always over my head.” – Kiddushin 31a

In other words: when you walk around with a Kippah all the time – you’re more inclined to behave like a mensch!

The Kippah is a common Bar/Bat Mitzvah symbol for several reasons:

There are two types of Tallitot:

Traditionally, the father buys his son his first Tallit for the Bar Mitzvah. The same is true for girls in conservative and reform communities – where the parents buy their daughter her first Bat Mitzvah Tallit.

Tip: If you’re getting a Bar Mitzvah Tallit as a gift – make sure you get the right Tallit size.

In many Ashkenazi communities, men start wearing a Tallit only after they get married.

Tefillin are a pair of small black leather boxes Jewish men wear during the morning prayer.

Both Tefillin boxes contain parchment scrolls with verses from the Torah (written in Hebrew).

Like the Tallit – the father usually buys his son his first pair of Tefillin for the Bar Mitzvah.

There are different types of Tefillin:

Tip: Buying a Tefillin can be tricky. If you’re planning to buy a new pair of Tefillin – make sure to follow our Tefillin buying guide to avoid expensive mistakes.

When people mention the word “Torah”, they usually refer to the five books of Moses (also known as Chumash or the Torah of Moses) – the holiest book in Judaism.

But technically, the Torah can mean different things depending on the context:

The literal definition of Torah is “instruction” or “law”. But it’s more than just a dictionary definition. It’s exactly how Jews treat it – as a guide to life.

Every Monday, Thursday and Saturday morning, we read a portion from the Torah during the morning service. When Jewish boys celebrate their Bar Mitzvah, they read a Torah portion and may even chant the Haftarah (a section from the biblical prophets). Sometimes they even lead the entire Shabbat morning service (if they’re trained to do so).

Note: In conservative and reform communities – Bat Mitzvah girls read from the Torah as well.

The Torah reading is the main highlight of the Bar Mitzvah service. It’s the reason why you get up so early on a Saturday morning (usually) to attend the ceremony (or is it because of the candy?).

A Yad (יד), which literally means “hand”, is the pointer we use to read from the Torah scroll. It’s designed to protect the scroll from damage (hint: Torah scrolls are handwritten, delicate and VERY expensive).

During their Torah lessons, Bar Mitzvah boys will often practice reading with their Torah pointer to get used to it before the “live show”.

A Torah pointer is a popular Bar Mitzvah gift, especially for Orthodox Jewish boys. Most of these boys will continue reading from the Torah in the future – in which case it makes a whole lot of sense to get them their very own Torah pointer, doesn’t it?

Every Friday night, Jewish women light Shabbat candles to welcome the Sabbath (men can light them too in the absence of a Jewish woman).

Lighting Shabbat candles is a commandment that is exclusive to women. That’s why Shabbat candlesticks are considered to be one of the most appropriate Bat Mitzvah gifts for girls.

A Kiddush cup is the cup Jewish people use when reciting the Kiddush blessing (the blessing over wine) before Shabbat or holiday meals.

We fill (literally) the Kiddush cup, recite the Kiddush blessing, say L’chayim (the Hebrew version for “cheers”) and take a sip from the cup.

Now you see why Shabbat meals are so much fun?

Kiddush cups are considered a common gift for both Bar Mitzvah boys and Bat Mitzvah girls, and arguably one of the few Jewish gifts that are suitable for both men and women.

If you ever attend (or host) a Bar or Bat Mitzvah, odds are you’ll stumble into the mysterious Tree of Life at some point: whether it’s on the Bat Mitzvah invitation, part of the Bar/Bat Mitzvah decor, or most likely – when the girl gets brand new and shiny Bat Mitzvah Jewelry gifts.

Note: Tree of Life Jewelry is one of the most common Jewelry gifts on other occasions too: from birthdays, Jewish weddings and even anniversaries.

What’s the story behind this unique symbol?

The Tree of Life is an ancient Kabbalistic diagram that describes the 10 principles God used to create and manifest himself in the world. The principles are represented as 10 interconnected spheres (Sefirot) – that together form the Tree of Life.

Let’s go over each Sefirah and explain what they mean:

It’s about time we talk about the most widely recognized Jewish symbol in the world: the Star of David. Heck, you’ve already seen it a bunch of times on this page alone (there’s a Star of David in Amen V’Amen’s logo)!

Not only is the Star of David the most widely recognized Jewish symbol, but it’s also the favorite choice of Jewish Jewelry among both Jewish men and women.

Long before the Star of David made its way into the Israeli flag 🇮🇱, the famous Hexagram was already recognized as a powerful symbol in the Kabbalah.

According to the Kabbalah, God created man with 7 divine principles:

Look back at the Tree of Life diagram I mentioned earlier… Notice anything “weird”?

Yes, these are the exact same emotional principles that form the bottom 7 Sefirot of the Tree of Life. And if you look closely – you’ll notice that they’re shaped just like a Star of David.

The puzzle pieces are coming together… aren’t they?

No, I’m not talking about the Indian tea, silly!

Chai (חי) is the Hebrew word for “alive”. In Jewish numerology – the letters forming the word “חי” add up to the number 18. That’s why the number 18 holds a special meaning in Jewish tradition.

You’ll notice that both Chai and the number 18 are recurring themes in Bar & Bat Mitzvahs, and Judaism in general:

Tzedakah is the Hebrew word for charity. It’s considered by many to be one of the highest of all the Torah commandments, and one of the most cornerstones of Judaism.

The Torah commands every Jewish person to donate at least 10% (a tithe) of their income to charity… and that is after taxes!

That includes the Bar & Bat Mitzvah! Bnai Mitzvah usually give Tzedakah as part of their Mitzvah Project, where they choose an organization or cause they like, and contribute a portion of the money they get for their Bar/Bat Mitzvah, or even launch a fundraising campaign and invite their guests to contribute!

Ever seen people dancing on a chair? No?

Well, then you’ve never attended a real Bar/Bat Mitzvah party. The Hora Dance, aka the “Chair Dance” is a traditional Jewish dance where we lift the man (or woman) of the hour on a chair and dance around with them.

The funniest part is when the ones who lift up the Bar/Bat Mitzvah are so wasted that they the poor kid ends up going through a rollercoaster ride… and all of that after eating a delicious Bar/Bat Mitzvah meal… oy vey!

Some find the Hora Dance the most entertaining part of the entire party, others find it the most awkward part. Which camp you belong to often has to do with whether or not you’re the one who ends up sitting on the chair…

There you have it. 10+ fascinating Jewish symbols, and how they’re used in a Bar & Bat Mitzvah ceremonies.

I hope you enjoyed the journey down the rabbit hole… and if you’re attending a Bar/Bat Mitzvah anytime soon – I’m sure you’ll enjoy it more now that you know what these Bar & Bat Mitzvah symbols actually mean.

If you found this interesting – then share it, will ya? So that other people can tumble down the rabbit hole! 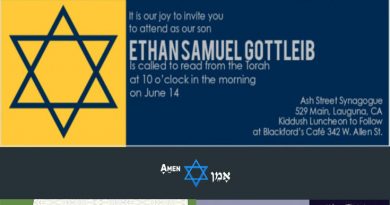 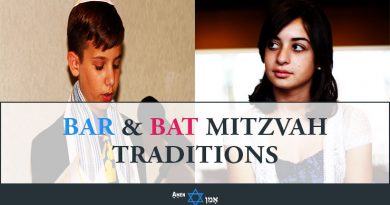 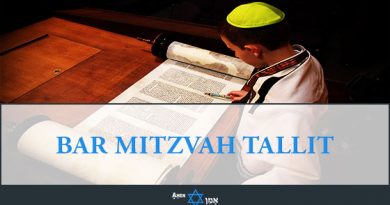