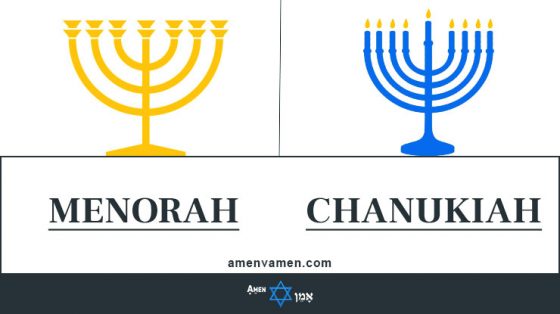 Trust me, you’re not the first one…

Allow me to explain…

Before Hanukkah Menorahs became a “thing”, there was only one single Menorah – the ancient golden candelabra from the Jewish temple.

The original golden Menorah had 7 branches: three branches on each side and one main branch at the center. Each branch had a dedicated oil cup that was lit using olive oil.

To this day, the Menorah remains one of the most widely used Jewish symbols in the world. Throughout the years, It was used in a wide variety of fields, ranging from art, coins, synagogues, jewelry, and logos – including the official emblem of the state of Israel.

Nowadays, 7 branch Menorahs (the “regular” Menorah) are mostly used for decorative purposes. It can’t be used as a Hanukkah Menorah.

On Hanukkah, we use the…

The 9 branch candelabra, also known as Hanukkah Menorah or Chanukiah (sometimes spelled “Hanukkiah” or “Chanukkiyah”), is the lamp that Jews light during the 8 days of Hanukkah. The Menorah is comprised of 8 branches – one for each day of Hanukkah, plus another one for the Shamash – the “helper” candle.

The term “Menorah” literally means “lamp” in Hebrew. Since the same term was used to describe two different types of Menorahs (the regular Menorah and the Hanukkah Menorah), Jews later created the word “Chanukiah” – derived from the word “Hanukkah” – to distinguish between the two and finally put an end to the confusion.

Unfortunately, this addition hasn’t really caught on in most of the Jewish world (except for Israel), and most Jews still refer to the Chanukiah as “Menorah”. And so the confusion lives on!

We celebrate the 8 days of Hanukkah to commemorate the miracle that took place in the Jewish temple during the revolt of the Maccabees against Antiochus and the Syrians.

As the story goes – when the Maccabees, led by Judah Maccabee, finally liberated Jerusalem and reclaimed the Jewish temple, they used the small amount of oil they had to light the Menorah. Even though the oil was barely enough to last for one day, it miraculously lit the Menorah for 8 whole days…

That, ladies and gentlemen, marked the birth of Hanukkah! And Jews have been lighting Hanukkah Menorahs ever since!

A Kosher Chanukiah has two requirements:

Tip: You’ll notice that some modern Menorahs “fail” at least one of these requirements (while others “pass”). So if you want to abide by the rules of Hanukkah, make sure your Menorah does more than simply look amazing…If you want to be on the safe side, stick to a traditional Hanukkah Menorah and you should be golden (pun not intended).

There are a couple of important differences between the 7 branch Menorah from the Jewish temple, and the 9 branch Menorahs we light during Hanukkah (aside from the number of branches, of course)…

Unlike the 7 Branch Menorah, you can light the Hanukkah Menorahusing either candles or oil.

There’s a common misconception that lighting oil Menorahs is somehow preferable because it’s similar to the way our forefathers lit the golden Menorah. That’s a myth; plain and simple.

Sure, you could use oil to make the candle lighting experience more authentic, but that doesn’t mean that it’s somehow “better” than using candles. You’re fulfilling the commandment of lighting the Hanukkah Menorah, regardless of which method you choose.

Unlike the 7 Branch Menorah, the Hanukkah Menorah can be made of any color and any material

Could you imagine if all of us had to buy a golden Menorah for Hanukkah? Things would get really expensive, really quick.

Luckily, you can choose any type of Menorah, any material, and any color.

Whether it’s a silver Menorah, crystal Menorah, glass Menorah, marble Menorah, Jerusalem stone Menorah or even a wooden Menorah (as long as it’s not flammable).

You could even buy a gold Menorah (or brass) if you want. And believe it or not, you could actually get one at a fairly reasonable price (I was kidding earlier).

Unlike the 7 Branch Menorah, the Hanukkah Menorah is displayed publicly

The golden Menorah was kept indoors and out of sight, in order to keep it safe (which, unfortunately, didn’t prevent Antiochus from stealing it)

We also light the Menorah indoors (it’s kind of challenging to light it on a breezy winter day), except we don’t keep it out of sight. In fact, not only do we keep it within sight, we publicize it (literally!), usually by placing it near a window.

By doing so, we fulfill the commandment of “Pirsum Hanes” (Hebrew for “publicizing the miracle”).

Unlike the 7 Branch Menorah, we light the Hanukkah Menorah at night

At the Jewish temple, the golden Menorah was lit during the daytime. We light our Chanukiah after sundown and keep it lit all night (until the candles naturally blow out).

Every Chanukiah is a Menorah, but not every Menorah is a Chanukiah

As I mentioned earlier, the term Chanukiah was invented to alleviate the confusion when using the word “Menorah”.

A Chanukiah strictly refers to a Hanukkah Menorah (9 branches), while a Menorah can mean any type of Jewish lamp, including a Chanukiah.

Or, to put it simply: Every Chanukiah is a Menorah, but not every Menorah is a Chanukiah.

Hopefully, this article sheds some light (pun intended) on the differences between a Menorah and a Chanukiah.

All that’s left? Lighting the candles! (or oil cups)

There are over a dozen of Menorah types you can choose from. So choose wisely!

Remember: 7 branch Menorahs are strictly for decorative purposes (especially when decorating for Hanukkah). 9 branch Menorahs (Chanukiah) is what you light on Hanukkah. As long as you don’t mix up the two, you should be golden 😉. 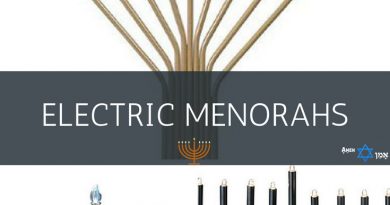 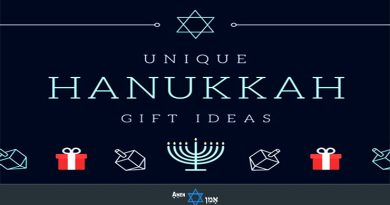 6 thoughts on “Menorah (7 Branches) vs Chanukiah (9 Branches): What’s the Difference?”