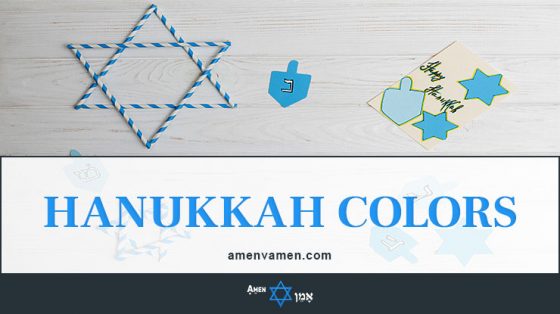 If you walked into a Jewish home during Hanukkah (please make sure you’re invited to one… otherwise that’s called “breaking and entering”), odds are you’ll see two colors stand out: blue and white (sometimes silver).

Blue and white are the traditional colors of Hanukkah. You’ll see them on anything from Hanukkah decorations, Hanukkah gifts, and even modern Menorahs…

What’s the deal with these colors?

A cynical fella might think: “It’s probably a way for Jews to keep up with Christmas”. Well, our dear Mr. skeptic couldn’t be more wrong…

Blue & white come up everywhere in the Jewish tradition. Whether you attend a Jewish ceremony like a Bar Mitzvah or Jewish wedding, wear a Tallit or visit Israel: there’s that blue & white again.

In the Torah, God commanded the Israelites to weave blue (tekhelet) tassels on the corners of their garments:

Speak to the Israelite people and instruct them to make for themselves fringes on the corners of their garments throughout the ages; let them attach a cord of blue to the fringe at each corner. – Numbers 15:38

That’s why you’ll often see the color blue in religious and spiritual settings:

Blue is also a symbol of peace, calmness, and tranquility. If you ever attend a guided meditation session, the instructor will often ask you to imagine a relaxing atmosphere like a beach or a clear blue sky.

White, on the other hand, is the symbol of purity and cleanliness.

That’s why Jews wear white on special occasions like Jewish weddings and holidays (especially during the Jewish high holidays).

White is also associated with light.

If you ever heard someone describe a near-death experience, you’ll notice they often describe it as a “bright light” or a “light at the end of a tunnel”.

Even in movies (like when Harry Potter speaks to Dumbledore in the spiritual world), heaven is often portrayed as a white, bright place.

If you approached a random person on the street and asked them: “what colors come to mind when they think of Judaism?”

Odds are their response will be blue & white (or “I dunno”, but that’s not useful, now is it?). That person doesn’t have to be a Torah scholar to come up with that answer, either.

The reason blue and white immediately jump to mind is that they saw it in a Jewish or Israeli context at some point in their life: whether they attended a Jewish ceremony like a Bar Mitzvah or Jewish wedding, a Hanukkah party, or just visited Israel on a trip.

The most obvious example is the Israeli flag 🇮🇱, which famously includes a blue Star of David, two blue stripes and white background. The flag was designed by the Zionist movement in 1981 and officially adopted in 1948 when the state of Israel was founded.

Israel’s independence is strongly tied to the story of Hanukkah – where the Maccabees reclaimed the Jewish Temple and celebrated their Jewish independence. This connection between the two makes the choice of blue & white colors more meaningful.

In an 1860 poem called Zivei Eretz Yehudah (The Colors of Judah), Jewish poet Ludwig August von Frankl described the blue and white color choice as follows: “All that is sacred will appear in these colors: white — as the radiance of great faith; blue—like the appearance of the firmament.”

Speaking of Judah, the flag of Jerusalem combines the blue and white colors of the Israeli flag, the Lion of Judah symbol, surrounded by olive branches.

Blue & white is also prevalent in Israeli politics. In fact, the largest political party in Israel at the time I wrote this article (November 2019) is called Kachol Lavan (כחול לבן), which, you guessed it, means “Blue & White”.

A common misconception is that Hanukkah candles MUST be blue & white. That’s wrong.

The same goes for Hanukkah flowers, tablecloths and other decorations. Just because blue and white are the traditional Hanukkah colors, doesn’t mean that EVERYTHING has to be blue and white.

Where does silver fit in the picture, you ask? Aside from silver Menorahs being a favorite among Jews, it doesn’t really. But it does look all shiny and sparkly! Just like Christmas decorations…

Tip: Again, that doesn’t mean you have to decorate in silver, or blue and white for that matter. It’s a free country, decorate as you please!

That’s just a bonus…and a beautiful bonus at that!

When you decorate your home in blue and white, you’re continuing a long, meaningful and beautiful Jewish tradition.

You can find many blue and white Hanukkah decorations, Hanukkah gifts, flowers, and even Menorahs. The sky’s the limit! 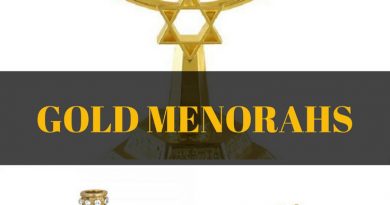 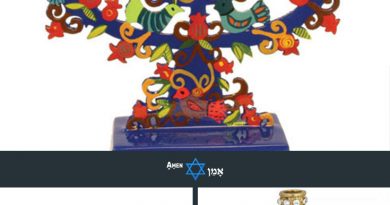